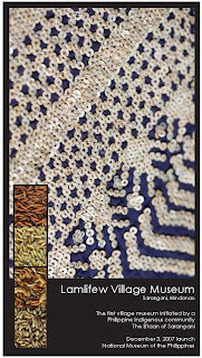 Photo by At Maculangan
The first village museum in the Philippines is being established in the hamlet of Lamlifew, in an interior highland part of the municipality of Malungon in the Province of Sarangani, Mindanao. Initiated by the indigenous Blaan inhabitants of Lamlifew, this museum will provide information and growing specimens of the dozens of varieties of upland rice that the B’laan have managed to nurture — notwithstanding the ascendancy of monocropping over the last century. This rice  museum will be taken care of entirely by Lamlifew villagers, including the
cyclical planting of the seedlings that they find in their continuing search  among the other highland Blaans for even rarer varieties.

This village museum will be launched at 6 p.m. on Monday, 3 December 2007, at the Museum of
the Filipino People (Finance Bldg.), National Museum of the Philippines, Manila. Attending the evening event is one of the project’s principal sponsors, Governor Miguel Domiguez of the province of Sarangani. He joins the Blaan women who are coming to Manila from December 1–10, to introduce the Manila public to their museum and to the wealth of rice culture preserved by the Blaan.

The launch of the Lamlifew Village Museum at the National Museum is a symbolic  demonstration of the support by a national cultural agency of a village-based cultural initiative. According to Marian Pastor Roces, the independent curator who introduced the Lamlifew Blaan effort to the National Museum, the launch signals a new kind of trusteeship. Instead of centralizing the idea of caring for and interpreting cultural materials exclusively at the national level, the Lamlifew Village Museum moves towards decentralization. This direction will  mean that eventually, it will be understood that the most effective custodians  of local cultural and indeed even scientific heritage, are to be found at the village level. Roces finds it impressive that the Lamlifew Village Museum will have its own institutional identity separate from any national or even regional  agency; and equally impressive that the National Museum’s Director, Corazon  Alvina, recognizes the vitality of such an initiative.

Lamlifew is an unusual village in that, in its quiet, unhurried ways, it has been a catalyst
for tradition-sensitive change. A few years ago, Lamlifew women formed themselves into a association, and set about establishing an enterprise based on  traditional beadwork and weaving. They eventually registered themselves with the Philippine Securities and Exchange Commission, likely becoming the first such formal entity instituted by a Philippine indigenous group. They were assisted by yet another rare agency: the Indigenous Peoples Development Program (IPDP), created by the Provincial Government of Sarangani as acknowledgement of the  provincial profile: more than half its population consists of indigenous peoples. The IPDP staff, many of whom are Blaan themselves, have made it a
point to provide assistance that encourages and allows for independent action on the part of villagers. Such independent action is embodied in the Lamlifew Women’s Association, now strong enough to undertake a museum project.

It was the IPDP that first introduced the Lamlifew women’s association to Marian Pastor Roces, president of TAOINC - a museum planning agency. By conceptualizing  the village museum project, she is thus bringing together the wishes of the Lamlifew women’s association; and the advice, oversight, and technical support of the IPDP. Assisting Roces with the launch, fund-raising, project implementation and promotion/sales of Sarangani B’laan upland rice is Marlene Po, indigenous peoples (IP) advocate and cultural worker